link Live features Warren Edwardes' idea for Cricket - "A brilliant Idea. I wonder why it hasn't been thought of before." Peter Allen

Cricket commentators often say "he will want to win the toss this morning" and Richie Benaud is alleged to have said: "What an unlucky tosser that man is". The most effective way to win a one-day game is to win the toss, especially in England with its poor weather. Market forces should be applied to Cricket. The Toss should be replaced by the Bid.

I suggest that the two captains should bid in runs for the right to elect to bat or field first. The higher bid wins the right to elect and the runs bid are awarded to the opposing side as Bid-Byes. Bids should be for a minimum of Zero. Should both captains bid the same number of runs then there will be a coin toss with the winner forfeiting the runs bid.

I read with interest about your relocation experiences in the Financial Times of 28th December 2005. The same newspaper published a letter from me on 19th May 1999 which I attach. I quite often get asked about my suggestion. Perhaps you can pass this on to the Cricketing Committee for consideration.

Winning or losing the Toss can make a dramatic difference to the result and reduces the importance of skill not just in One Day games but also in Test matches. Even more important than the actual effect that a lucky Toss has on a result is the perception of effect on the players.  I have often heard a losing captain complain “It was an important toss to win”.

Cricket is now too important to still be a game of chance. The game has moved on from home umpires. Cricket now has a third umpire with video evidence. May I recommend that The Toss to choose to bat or field should be replaced by The Bid by the time of the ICC Champions Trophy in India. 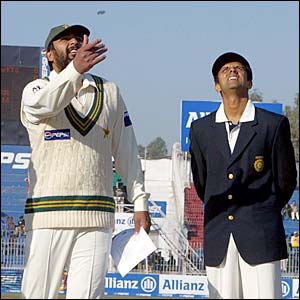 he runs bid are awarded to the opposing side as Bid-Byes.

Bids should be for a minimum of Zero.

Should both captains bid the same number of runs then there will be a coin toss as currently but with the winner forfeiting the runs bid.

In a sealed envelope, the captain of Team A Bids 30 runs.

In a sealed envelope, the captain of Team B Bids 10 runs.

The captain of Team A has the right to elect to bat or field.

30 runs are awarded to Team B as bid byes.

If the sealed bids are tied then the coin is tossed. But the winner has the right to elect and the loser receives bid bye runs of the amount of the tied bids.

To create more theatre bids could be as in an open auction with the umpire asking for bids in jumps of 5 runs.

The captain of Team A raises his hand first.

Then to the captain of Team B the umpire asks: “Do you bid 10 runs?

And so on until a captain declines to bid more.

The winning captain has the right to elect to bat or field and the losing captain’s team receives bid bye runs of the amount of the bid.

I would recommend the Method 2 - open auction – as providing more theatre and tension before the match and it would make for great television.

Yours sincerely with kind regards,

"How to capture the big new IDEA"

How to play football by numbers

Cars should start in reverse order to introduce overtaking

Just turn the problem on its head.

simple solution to the cricket match fixing scandals - legalise it.